Dixieland music is a style of jazz. Dixieland developed in New Orleans, Louisiana at the start of the 20th century, and spread to Chicago, Illinois and New York City, New York by New Orleans bands in the 1910s, and was, for a period, quite popular among the general public. It is often considered the first true type of jazz, and was the first music referred to by the term jazz (before 1917 often spelled jass).

The term Dixieland became widely used after the advent of the first million-selling hit records of the Original Dixieland Jass Band in 1917. The music has been played continuously since the early part of the 20th century. Louis Armstrong’s All-Stars was the band most popularly identified with Dixieland, although Armstrong’s own influence runs through all of jazz.

Many Dixieland groups consciously imitated the recordings and bands of decades earlier. Other musicians continued to create innovative performances and original new tunes. Some fans of post bebop jazz consider Dixieland to no longer be a vital part of jazz, while some adherents consider music in the traditional style, when well and creatively played, every bit as modern as any other jazz style.

Dixieland combos usually have a rhythm section with a combination of drum kit, upright bass, piano, and banjo or guitar. The lead instruments are usually restricted to the trombone, trumpet, and clarinet. The definitive Dixieland sound is the simultaneous playing of the three lead instruments.

With the advent of bebop in the 1940s, the earlier group-improvisation style fell out of favor with the majority of younger black players, while some older players of both races continued on in the older style. Though younger musicians developed new forms, many bebopers revered Armstrong, and quoted fragments of his recorded music in their own improvisations.

There was a revival of Dixieland in the 1950s, which brought many semi-retired musicians a measure of fame late in their lives. This period is sometimes seen as a fad.

There was also in the 1950s a style called “Progressive Dixieland” which sought to blend traditional Dixieland melody with bebop-style rhythm. Steve Lacy played with several such bands early in his career.

Etymology
While the term Dixieland is still in wide use, the term’s appropriateness is a hotly debated topic in some circles. For some it is the preferred label (especially bands on the USA’s West coast and those influenced by the 1940s revival bands), while others (especially New Orleans musicians, and those influenced by the African-American bands of the 1920s) would rather use terms like Classic Jazz or Traditional Jazz. Some of the latter consider Dixieland a derogatory term implying superficial hokum played without passion or deep understanding of the music.

According to jazz writer Gary Giddins, the term Dixieland was widely understood in the early 20th century as a code for “black music.” Frequent references to Dixieland were made in the lyrics of popular songs of this era, often written by songwriters of both races who had never been south of New Jersey. Other composers of the “Dixieland” standards, such as Clarence Williams and Jelly Roll Morton, were native New Orleanians.

Dixieland is often today applied to white bands playing in a traditional style. Some critics regard this labeling as incorrect. From the late 1930s on, black and mixed-race bands playing in a more traditional group-improvising style were referred to in the jazz press as playing “small-band Swing,” while white and mixed-race bands such as those of Eddie Condon and Muggsy Spanier were tagged with the Dixieland label.

This brings us back to the fundamentally problematic character of the term Dixieland as a musical category. There are black musicians today, young as well as old, who play New Orleans jazz, traditional jazz or small band swing, that musically could also be called Dixieland, although black musicians would not usually accept that term. Thus it makes sense to say only white musicians play Dixieland. In the early 20th century, Dixieland may have been understood as a code for black music in the northern US. However, in New Orleans the distinction was as clear then as now. It is sometimes said that only white bands were called Dixieland bands, like the Original Dixieland Jazz Band. While there is some evidence for this generalization, there are numerous counter examples of African American New Orleans musicians calling their music “Dixieland” or including the word “Dixieland” in the name of their band from the 1920s through the 1960s. Younger generations of African American New Orleans musicians generally strongly reject the “Dixieland” label. A number of early black bands used the term Creole (as with King Oliver’s Creole Jazz Band), including some that were not actually ethnic Creoles.

Younger generations of primarily white players continued to find inspiration in the spirited, highly rhythmic traditional style of playing, with the result that the ranks of African-Americans today playing in the Dixieland style of jazz are very few. However, this has to be understood with the recognition that Dixieland jazz is as much a social/racial category as it is a musical one, unlike the more specifically musical New Orleans jazz or Traditional jazz. In these latter categories there are plenty of active young black musicians. The upshot of this is that although Dixieland is a term used to mean “traditional jazz” outside of jazz, within jazz it is a white subset of traditional jazz. 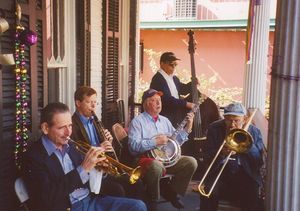 1. Chicago style is often applied to the sound of Chicagoans such as Eddie Condon, Muggsy Spanier, and Bud Freeman. The rhythm sections of these bands substitute the string bass for the tuba and the guitar for the banjo. Musically, the Chicagoans play in more of a swing-style 4-to-the-bar manner with emphasis on the backbeat (ie. beats two and four). The New Orleanian preference for an ensemble sound is deemphasized in favor of solos. Chicago-style dixieland also differs from its southern origin by being faster paced, resembling the hustle-bustle of city life. Chicago-style bands play a wide variety of tunes, including most of those of the more traditional bands plus many of the Great American Songbook selections from the 1930s by George Gershwin, Jerome Kern, Cole Porter, and Irving Berlin. Non-Chicagoans such as Pee Wee Russell and Bobby Hackett are often thought of as playing in this style. This modernized style came to be called Nicksieland, after Nick’s Greenwich Village night club, where it was popular. though the term was not limited to that club. Eventually, this music came to be called Mainstream jazz, a term popularized by British critic Stanley Dance.

There are also active traditionalist scenes around the world, especially in Britain and Australia.

Famous traditional Dixieland tunes include: “When The Saints Go Marching In, ” “Muskrat Ramble,” “Struttin’ With Some Barbecue,” “Tiger Rag,” “Dippermouth Blues, ” “Milenburg Joys,” “Basin Street Blues,” “Tin Roof Blues,” “Madame Beccasine”, and many others. All of these tunes were widely played by jazz bands of both races of the pre-WWII era, especially Louis Armstrong. They came to be grouped as Dixieland standards beginning in the 1950s.